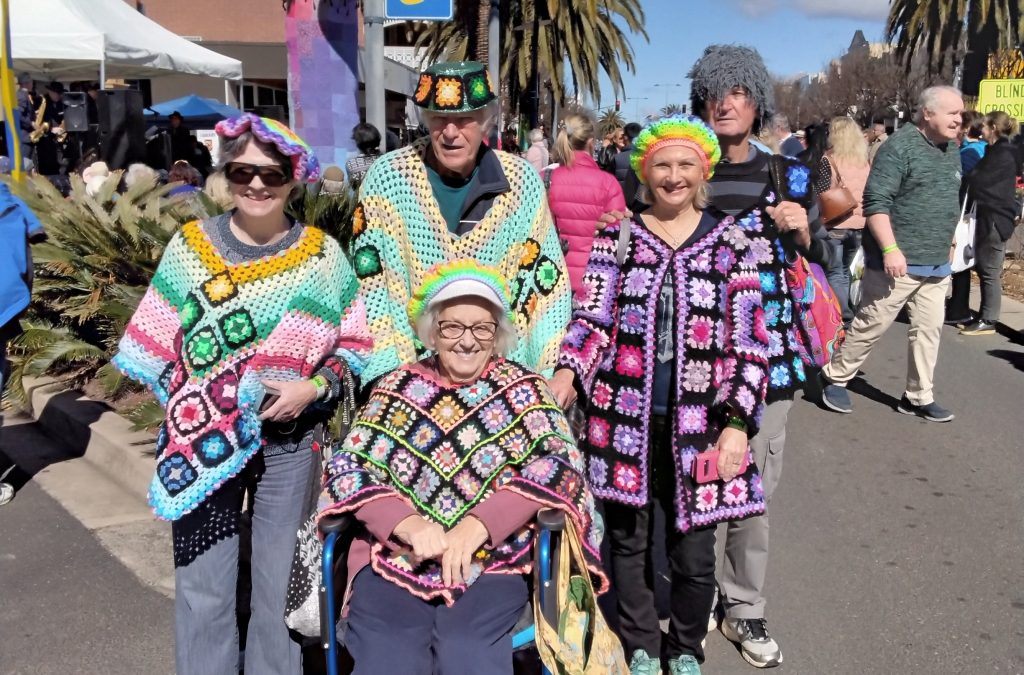 Winter in Warwick can be dominated by frosty mornings and evening fireplaces. Winter in Warwick has also become synonymous with the Jumpers and Jazz Festival. Winter has become Warwick’s Wow Factor!

Known as The Rose City, Warwick lies an hour south of Toowoomba on the plains and the Condamine River of the Darling Downs that attracted the early Europen sheep settlers on to the traditional lands of the Gitabhul Aboriginal peoples. It is also my birthplace. St Mary’s Cathedral is a well-known landmark

Although I was only a child of five when my secondary school teacher father was transferred from Warwick High to Toowoomba, the tales of Warwick have loomed large in my life. My father’s Irish grandparents arrived in the Swanfels/Yangan valley to forge a new life away from the hardships following the Potato Famine in Ireland, and we have visited our many relatives there frequently over our lifetime.

So it was with both curiosity and familiarity that LSM (long-suffering mate) and I arrived for the 2021 festival. His family ties also lie in that Southern Downs area, so there was plenty for both of us to enjoy.

We started our day trip at Federation Park on the banks of the river and close to the famous Tiddalik frog statue. The legend of the floods lies in its mouth.

The history of Warwick and its surrounding districts, from its Indigenous roots to the colonial settlement and harsh government policies to more modern aspects of life are depicted on plaques winding through open parkland. The information and images bring Warwick’s reason for being very much alive. It is a credit to the designers and builders.

Then it was on to The Abbey of the Roses. This once Sisters of Mercy Convent which dominated the town from its hilltop location, now offers highend luxury accommodation and has become a sought- after wedding and events venue. Open Days at the Abbey are very, very popular to catch a glimpse of the internal design.

if you are after a comprehensive collection which expands on the information at Federation Park, then Pringle Cottage is a treasure trove. Here LSM was able to chat to the knowledgeable volunteer guide and share information about his relatives. The creative arts and crafts work of the volunteers captured the Festival’s theme of Crackers.

Then it was on to the street festival where it was great to see so many producers selling their quality wares, food stalls enticing visitors and the Jazz artists entertaining the big crowds eager to experience the festive atmosphere. Even the Suitcase Market of bric-a-brac and handmade goods was drawing big interest.

Lining the main Palmerin Street were the decorated trees which have become the symbols of the Festival. Each year the theme attracts predictable to quirky interpretations of the presiding theme – and Crackers saw a range of fun decorations. The winner transported me to Mexico and the fireworks of the Day of the Dead. The craftsmenship in this piece is outstanding. Others were humorous, and still others were stretching the theme a bit…lol!

Wandering the streets and people watching was fun. That’s what festivals bring out – the fun, friendship and finds in rural communities. There are plenty of sitting and chatting seats where you can snack or gather your thoughts.

Community pride certainly oozes out of Warwick’s heritage buildings and its major events like the Warwick Rodeo, and we were delighted to see the historic monument to The March of the Dungarees now in the centre of town. A wonderfully dedigned and executed tribute to those young men from surrounding areas, such as my Great-Uncle David Guy from Yangan who marched all the way to Brisbane to enlist in World War 1. A very proud find!

Armed with truffle oil and a three-cream brie with a truffle centre from Granite Belt Gourmet , we bid farewell to the Festival with the jazz music lingering as we ended with that wow factor!

A blog from Molly B