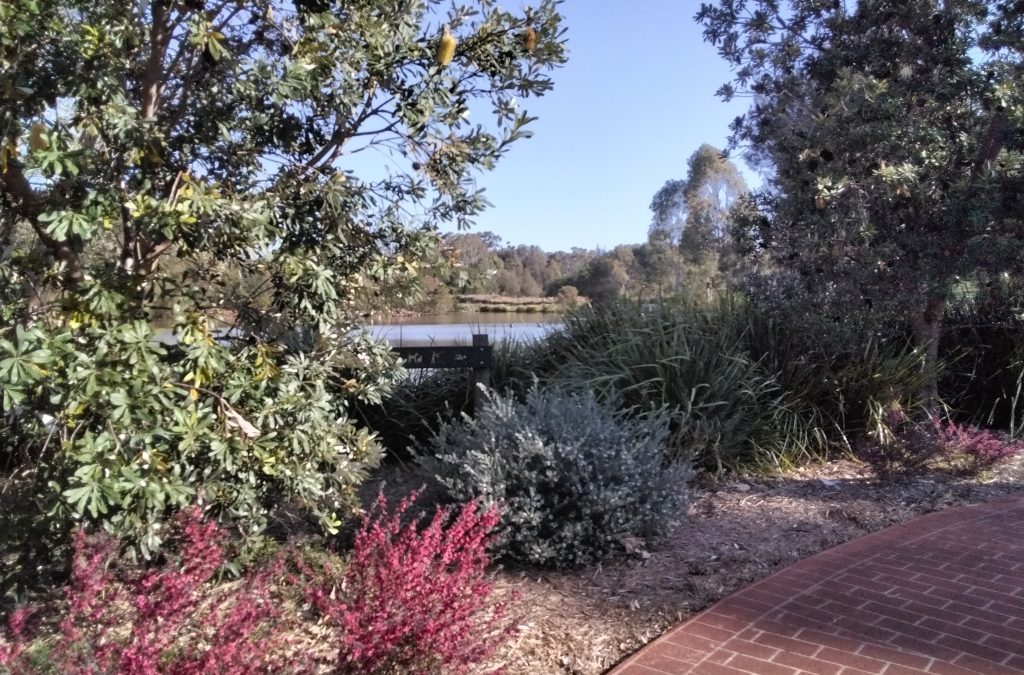 It was a latish afternoon and the lowering sun created a very peaceful glow. The filtered light created a very pleasant natural canvas through the trees and across the lawns of the units, houses, and backyard of a local church which have the good fortune to be built along its boundary. It must be tempting to walk dogs along the meandering paths, but there are none allowed….nor drones nor water activities.

So what was the history of this habitat?

It was conceived and championed by local residents to provide a place of safety and protection for the native birds, lizards, and plant species found in the local creek area. The particular advocate was Dr Neil McKilligan whose dedication on one of the many seats dotted along the walkway provides an indication of his determination for this place of natural refuge to become a reality. It was completed in time for the celebrations of the 200 years of European colonial settlement in 1988 under the Mayoral watch of Councillor Clive Berghofer and the then Councillors.

We were greeted by a duck and drake waddling near the thick plants lining the bank of the wetlands. It is definitely a place of sanctuary for many bird species, and their birdcall from the upper branches of old gums is very entrancing.

The views from the walking path stretch out to the island of large stick nests of the overwhelming numbers of Ibis. It almost smacks of a colonial barricade of these often maligned ‘bin chicken’ scavengers. It begs the question of which birds were around here originally, and was the influx of Ibis expected? LSM ventured the thought that there would be a downside for the nearby human residents when the south-easterly winds wafted the smells across from the island refuge.

The viewing platform overhangs the very murky brown waters, and this appears to be the hangout for the different species of ducks – a healthy mix. They entertain the walkers, photographers and they offer an insight into the separation of habitat between the smaller and the larger birds. The one permanent statute of an Ibis in the water provides a small platform for the brave bird trying to sun itself until challenged by the large Muscovy drake.

The plants provide not only protection for the birds, but a beautiful backdrop. The path winds around the grassed areas to the architecturally unexpected toilet block. What an interesting design! What a shame the graffiti bandits have attacked it!

Our ducky welcoming committee was there to farewell us as we strolled back towards the car park, and we couldn’t help wonder whether the Wetlands had been usurped by the Ibis and had eroded the original intent. At the time of the Spring Carnival in the Garden City much more could be made of the area to attract bird watchers and family picnics – but a bit of spit and polish would help.

A blog by Molly B