Quinalow – where the pigs party hard! 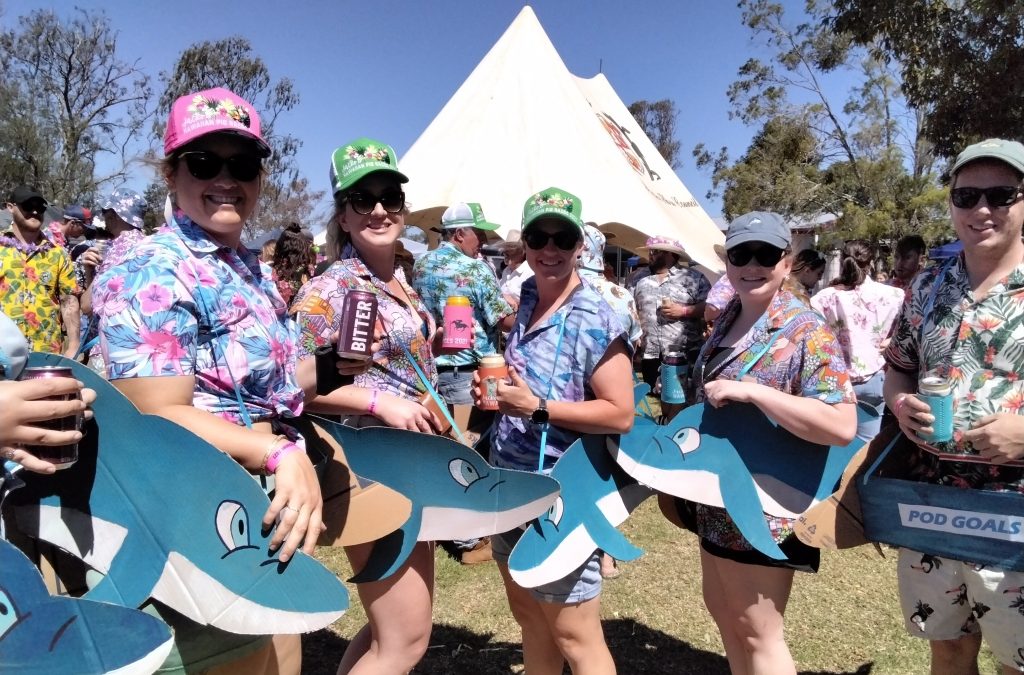 Greg and Cheryl Daley – publicans at the Quinalow Hotel – hosted another outstandingly successful Jacko’s Hawaiian Beach Party in memory of Jacko Reithmuller. This event which takes the Reithmuller family the whole year to organise, is a fun, family day raising money for the oncology unit at St Andrews Hospital and the Cancer Council in the hope that cancer research soon finds a cure and doesn’t take loved ones too soon like Jacko.

Greg believed the crowd was double that of the previous one and had his fingers crossed that around $30,000 might be the final count for funds raised. What an amazing event for a small community of 180 people (2016) sitting at the Gateway to the Bunya Mountains between Toowoomba and Dalby on the Darling Downs.

The grounds beside the pub were converted into a sea of Hawaiian-themed shirts, groups of families and friends sporting dubious outfits, costumes, leis, and definitely huge smiles. What a fun day!

The last time I visited Quinalow there were only a handful of caravans in the van park across the road from the pub. Today’s visit saw it overflowing with campers keen to spend as much time enjoying themselves as possible.

Volunteers are the key to the success of any event, and the number of volunteers here was jaw-dropping! From the efficient happy faces on the entry gatekeeping us COVID safe to the AMAZING raffle prize ticket sellers to the Reithmuller siblings Courtney, Bryce and Craig, and Mum Jenny, making sure the sweep tickets were ready for each race, to the cooks at the bbq and to the judges and the drink sellers – HATS OFF TO YOU!

These volunteers count on the generosity of local business sponsors to provide the facilities and the entertainment on the day…….and the sponsors for the Pig Races came out in spades! Not wanting to miss anyone, I will leave that list to the organisers.

And so we come to the pigs!

The Pig Races hosted by Noah’s Racing Pigs from the historic Darling Downs Hotel affectionately known as the Sandy Creek Pub about 10 kms outside Warwick are a hoot! Each pig is sponsored, wears a glitzy coloured bib, and joins in the races about every 45 minutes. Obviously at the top of their game in terms of animal safety and health, this lovely couple knows how to pull and hold a crowd.

Race 1 and newcomers to the races realised they were in for a helluva fast-paced ride. Firstly the auction of the pigs, with the highest bidder ‘owning’ the pig for the race. If their pig wins the race, the winner receives half of the purse, and the other goes towards the fundraising. It was a beautiful Spring day, but it seemed as if things warmed up quickly once the bidding started. The total purse for Race 1 was around $2600 once all 7 pigs were ‘bought’. Those not in syndicates bidding were able to buy sweep tickets to win $100 on each pig in each race in the sweep draw.

And they’re off! The pigs were trying to be the first to the bowl filled with milk at the end of a maze of barrels, hay bales, gates and ramps. Excited piglets and a bowl of milk make for a short-lived but exciting race – and it was the silver-coated pig that won. Prize winners were grinners! Then it was a break to get food and drink, sweep and raffle tickets before the next race.

It also gave time to check out the stalls along the perimeter. Local and near-local vendors showing their crafts and selling their wares.

The little tickers were not forgotten on this family day. Some found the treehouse in the distinctive bottle tree, while others like Cooper came with their families from Brisbane, only a hop, step and jump down the Range. The best-dressed boy and girl competition saw a bit of sibling squabbling over their Hawaiian props, and the cutest little strawberry in the patch didn’t know what all the fuss was about!

Race 2 saw the bidding heat up and one pig was bought for over $700. That brought a great cheer from the crowd! Another syndicate bought the winning pig, so won half their money back – what fun! It was also lovely to meet Eileen whose delicious jams and pickles are permanently on sale at the pub. Her gift packs are an ideal gift with Christmas coming up.

But what was happening inside the pub while all this was happening outside? Well, the charming ladies behind the bar, yes that’s Cheryl, and smiling bar helpers were hard-pressed to keep up with the demand. Relaxed punters spilled out onto the shady verandahs, and everyone seemed to have found their rhythm for the day.

As we reluctantly bid farewell to the fun to head back to Toowoomba, we were sure that the bids for the party pigs would rise in line with the amount of drinking that was happening throughout the afternoon. I can’t wait to find out the fund-raising efforts of the whole community efforts.

Well done Quinalow – Jacko lives on in all your hearts!