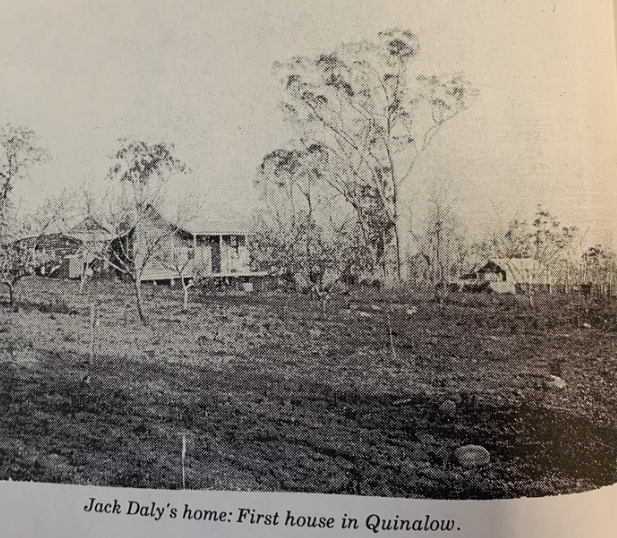 So the Daly Brothers’ influence on the growth of the District revolved around cheese. Brothers James, Patrick, and John (sons of John Daly and Bridget Hanrahan) established the first butter and cheese factory on the Darling Downs in 1889 at Quinalow. The families took up a selection at Brymaroo in about 1870, then expanded through the generations to have a significant impact on the development of the local district. As well as the butter and cheese factory, there was the Daly Saw Mill at Quinalow, the Quinalow Hotel, and the Post Office and general store at Peranga.

The sawmill was a boon for the district once the cheese factory flourished. In the early days, breaking down of logs was still done by pit sawing. In 1903 they built the larger mill at Quinalow….then a planning machine was added later. The mill employed 12 men housed in barracks and later houses for married workers. In 1905 the Daly brothers bought a steam traction engine for carting sawn timber to rail. There were also mills established in the Bell area all close to the Bunya Mountains.

Brother Patrick became engaged to Miss Leahy, Quinalow’s first school teacher. He donated 10 acres of land for the school, and the brothers donated the timber for the school which was completed on 26th February 1901. Sadly Patrick had ‘a terrible accident at his sawmill’ and despite ‘medical skill and good nursing’ at St Denis’ Private Hospital in Toowoomba, he passed away at the age of 30 in 1904. Miss Leahy never married after her loss.

The very significant legacy and community spirit of the Daly brothers still live on. Their vision of building the hotel to give the workers a recreation space is well and truly carried on through the same vision and hard work of Greg and Cheryl and the modern-day Quinalow community.