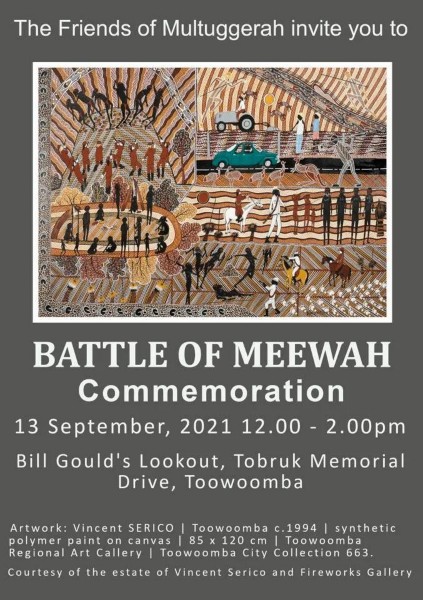 What a peaceful place to pay homage to the courage and strength of Multuggerah and to look out across to One Tree Hill, or Table Top mountain as locally known, see the quiet, non-invasive signs of the recent Wirrinya cultural burn on its summit and know that the culture and spirit of the Gaibal, Jarrowair and Western Waka Waka groups and the neighbouring Jaggera clan groups is alive in this place.

With Josh Waters as the MC for the program, he took the crowd of shared Indigenous and non-Indigenous supporters through the history of the campaign and Multuggerah’s impact. The theme of Righting Wrongs and bringing Truth Telling to all was reinforced by the ringing words of First Nations languages inviting the crowd to share the messages.

School students from Good Samaritan read the history, then students from Fairholme College laid a wreath, and paid tribute to the Year 4 students from Middle Ridge State School back in 2004, who were bewildered by the lack of recognition of this important piece of local history. Their own campaign to raise awareness and lobby the Council for recognition, has seen initial smaller plaques at three park areas grown in to the now dignified factual information walk at the Lookout.

Dr Mark Copland and Mel Waters from USQ shared the academic history and the journey of the Friends of Multuggerah to ensure recognition and truth telling, and friends were invited to join that movement.

Members of the Army laid a wreath in tribute to Multuggerah, and with the birdsong and gentle movement of the breeze in the trees during the Minute Silence, it was truly moving. The wreath was a tribute also to all Aboriginal and Torres Strait Islander servicemen and women who have served.

A fitting finale to the service was the playing of Uncle Kev Carmody ‘s specially composed song Multuggerah. The haunting words and music from this giant of a song maker, echoed across the valley to One Tree Hill and beyond.

This has become a very significant annual time for gathering, learning and sharing together. Taking the Pledge together was very powerful.