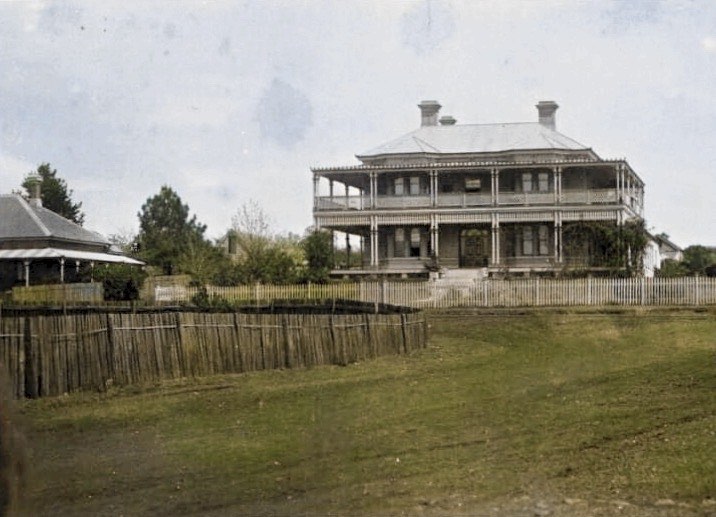 Streets are named after people, places, or things, and in Toowoomba, our streets are often a reference to our historic past. In the Toowoomba CBD, you will find Finchley Street, named in honour of Finchley, one of our city’s most striking residences that no longer stands today.

Finchley was built in 1876 and once stood at 143 Mort Street, opposite Finchley Street. Finchley sat on just over an acre of land and was built on a grand scale. From the elevated verandas, the home had a breathtaking view of Toowoomba. In 1916 Finchley was leant to the Military authorities for the term of the first world war and was converted into the No.4 Auxilary Hospital, known as the Finchley Convalescent Hospital (Not to be confused with Finchley Private Hospital on Russell Street). It was reported in the Brisbane Courier on 1st March 1916, that the No.4 Auxilary Hospital was due to open shortly, and that 42 beds had already been supplied.

Finchley was described in this article as standing well back from the street and was surrounded by large trees. “The rooms are well ventilated. Electric light is installed and there is a large cooking range and hot water installation in the kitchen. On the second floor, there is a fine bathroom, with large linen presses, and there is plenty of accommodation for a large staff”.

Finchley was a place of recovery for the soldiers, with an emphasis on comforts, such as a piano, gramophone and records, musical instruments, and games were funded by the Railway Committee and Red Cross.

Finchley was known as a place of entertainment, and every Saturday it had evening parties that became quite the institution with many artists, both amateur and professional, dropping in to entertain the men. In November 1916,

Finchley was ‘gazetted’ by the military as No. 9 Australian General Hospital, and it became a more disciplined place to which many in residence, the locals, or those who had visited, felt the loss of atmosphere. The home was under military control until early 1918 and was said to be looking neglected and overgrown with weeds.

After the war, there were efforts to keep Finchley as a place for soldiers without homes, friends, or family. Rather than Finchley being a permanent home for returned soldiers, it reverted to being a family home. In 1965 Finchley was purchased by the state government, and in October of that year the 89-year-old home was demolished, and the grounds cleared and leveled for use as an oval for the Toowoomba North State School. This oval became known as the Finchley Oval. In 2020, Toowoomba North State school erected a sign on the Finchley Oval, which will continue to remind us of where Finchley once proudly stood.