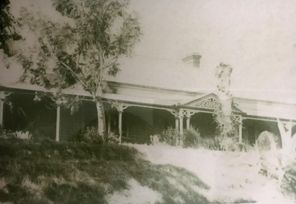 Sitting proudly atop of a glorious ridge on the eastern reaches of the Toowoomba Range, the Fernside homestead is one of Toowoomba’s most notable homes.

Added to the Queensland Heritage Register in October 1992, the story of this now iconic East Toowoomba residence begins in 1876 when John Alexander Boyce hired Gargett Builders to commence construction.

JA Boyce was Clerk of Petty Sessions and District Registrar (Clerk of the Court) in Toowoomba from the 1870’s to 1890’s. Fernside, a true gentleman’s residence, would be built upon basalt foundations with external walls of triple brick. Internally, the home was exquisitely detailed with cedar joinery and ornate pressed metal ceilings much of which remains today.

The Fernside estate stretched over 24 acres on the Toowoomba escarpment and once completed, the home offered commanding views over the city of Toowoomba to the west and the Lockyer Valley to the east. The grand proportions and the elevated position of the house proved to be highly desirable and between 1877 and 1883, Fernside would become the summer residence of the 5th Governor of Queensland, Sir Arthur Kennedy.

During this era, Kennedy would be responsible for managing the daily affairs of the colony and Toowoomba can make a claim to have been a capital city at a time during his residencies at Fernside. In fact, Fernside was locally referred to as Government House. Kennedy’s legacy remains today as the namesake for East Toowoomba’s Arthur Street, the easternmost stretch from Curzon to Fernside Street having formerly served as the drive to the residence.

While Governor Kennedy was in summer residence at Fernside, JA Boyce and his family holidayed at Sandgate. The Boyces returned to reside full time at Fernside in the late 1880s, and in 1902 the home would be sold to JA Boyce’s daughter-in-law, Margaret Anne Boyce, nee Griffiths. Margaret was the daughter of George Washington Griffiths, who established the Toowoomba Foundry. Margaret Boyce would go on to own the Fernside property and its various dwellings for nearly 70 years. During this time she regularly moved between dwellings, and the Fernside house would again be leased to local families, including Toowoomba Mayor Vernon Redwood.

As was customary with many of the larger old Toowoomba homes, the Fernside house would undergo many cosmetic, structural additions, and alterations over the years to accommodate income-producing flats. Verandahs were enclosed, interior walls altered, windows turned to doors and even a western wing added. During World War 2, the Fernside house offered so much by way of facilities that it would be commandeered by the Australian Army to serve as barracks for officers in the Women’s Army Corps.

During Margaret’s long period of ownership, the Fernside House would go through multiple cycles of repurposing, decay, and then renaissance making it hard to determine when the house might have been at its most glorious.

A glowing article in the Darling Downs Gazette on Oct 6, 1932, described Fernside’s house and the gardens as the oldest and most historic in Toowoomba and the Darling Downs. The article went into great detail about the mature ornamental trees, bowling greens, azalea walks, and magnificent flower borders in its “old world garden”. This might very well have marked the original peak of the iconic Fernside residence.

Margaret Boyce would pass away in 1968 at the age of 100 years old. At this time, the Fernside house would be passed on to her grandson Peter Boyce who primarily resided at Wandoan. Fernside would become his Toowoomba residence, and he resolved to restore the house as much as possible to its original features. Peter would remove the remnants of the western wing and reopen the verandahs to once again expose Fernside.s elegant facades. The grand cedar door and detailed cast-iron railings that today complete Fernside’s front elevation was purchased by Peter at auction from Wyalla prior to its demolition. 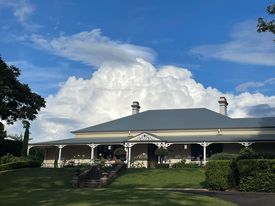 The 100-year ownership of Fernside by the Boyce family would end in 1976 when Peter would sell the property to Dr John Kibble. With Peter, the final legacy of the Boyce family to the Fernside house would be to begin a sustained era of renovation and restoration of the house and gardens that remains today, nearly 50 years later. John Kibble can be credited with renovating the front entrance to the property with the installation of a masonry wall and gates to the residence as well as renovating the front entrance hall and installing an attic bedroom. Cedar stairs, an east-facing dormer window, and new rounded French doors to the parlor remain today as a legacy to his work inside the home.

Ownership of Fernside has changed hands a number of times since the 1980s, with evidence of each successive owner’s additions of a tennis court and pavilion, pool, a garden shed remaining in the landscape today. Slowly but surely, the Fernside residence has been both restored and improved in an effort to maintain its historic character while accommodating the ever-increasing expectations of modern residence.

In 1992, Fernside was added to the Queensland Heritage Register in large part due to the renovation work of its successive owners, the house remains as a significant example of colonial architecture and a reminder of its important role in the history of Queensland.

Fernside was purchased by its current residents in 2015 who have significant experience renovating historic homes and gardens in the United States. With an eye toward ensuring another 150 years of livability, substantial renovation works were commenced on both the older and newer portions of the home. In an effort to respect and enhance Fernside’s original character, a mundane 1990s addition to the southern end of the house was demolished. This enabled access for a monumental landscape project which more than doubled the usable space to the east side of the house and includes new gardens, the addition of pool pavilions, outdoor facilities, and an outdoor kitchen suited to today’s expectations for such a property. The new addition to the house was carefully considered in accordance with heritage guidelines to both distinguish itself from the original structure but not depart too much from its style. A modern conservatory was installed to sit between the existing house and the similarly styled new build to provide a large and light-filled modern kitchen and family room which now serve as the spacious center of the home.

The restoration of the 1920’s east-facing bay to its original character would be completed during the renovation project, effectively returning the original Fernside house (at long last) to its original look during its heyday in the 1930’s.

Today, the Fernside residence benefits from the preservation of its remarkable historic grandeur and now the conveniences of a modern estate-style residence.

Its history illustrates that our historic homes are not to be taken for granted.

However, with steady care and attention, these wonderful old homes will continue to distinguish themselves as increasingly valuable connections to our colonial past.

When thinking of historic homes in Toowoomba, Fernside will thankfully continue to be a jewel in the crown for some years to come.