Monster Burger at The Cafe at Abbie Lane. 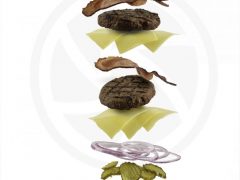 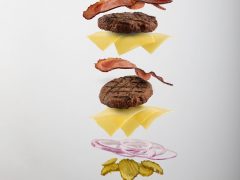 Kat Lynn from @FoodieShots had some fun with a local product from The Cafe at Abbie Lane. The Cafe recently promoted their delicious MONSTER BURGER and Kat wanted to challenge herself to create a deconstructed version.

So she started set up in the morning at about 9am and had poles and wires all ready with strobes and soft boxes by 10.30.

Kat had a good chat with Paul and Sam, the owners and collected the ingredients. Sam made sure the charred pattern on the patties was very pretty. The onion rings were cut beautifully and even the pickles looked fit for the occasion.

But she persevered and by 2pm she had captured each ingredient.

Now the exciting part…composing the shot in post. To say this file was large was an understatement. At one stage she was up to 4 gig!!!! Poor computer.

There were lots of masking layers, selections, as well as dodging and burning to create the layered effect.

What do you think? Does it make you want to wrap your mouth around this Monster!!!